Permission Needed to Leave the Plantation in 1953

I'll just call him Jerry to protect his identity. I met with Jordan Brewington and Ashley Rogers, employees at Whitney Plantation,  to analyze some new genealogical records and other records that indicated that peonage practices took place on the plantation.  In a letter that was written on February 23, 1953, from a man with the last name Andrews from Green & Gold Plantation.

He was writing to the owner or manager of Whitney Plantation in Wallace, La., he was writing asking for permission for Jerry to get his belongings from the plantation. He also understood that Jerry owed a balance of about $25, and he has six days time to his credit. Andrews was asking Whitney Plantation to bill him the difference as soon as possible.

A disturbing letter I found in the files at the National Archives dated April 8, 1912, to the Civil Government of the United States: Gentlemen,

We poor colored men here in the State of Mississippi and poor women does ask the Civil Government to please, please send us someone here to take us out of this place our wives and children are naked and barefooted and we are the same, they have here what is known as pennick slavery, they go to work and beat poor negroes with sticks and shoot them and kill them just like they were shooting wild bears in the woods adn we have big crops here and they won't settle with us they just work us like dogs and mules, and they just take our labor if you think we are lying please send your men here and just let them see our little-naked children and wives adn come and question with the labor on the place. When you send someone, please send them to carry us away if you don't they will shoot us down after they are gone, please come and take us away from, here they only give us half enough to eat.  Jerry Robinson and Harry Seaton Robinson-Albin, Miss. and all down to Swan Lake and had people whipped with straps weigh about 6 pounds, they whip here just like they do in the Penitentiary if they hire us to work by the day they don't pay for that don't pay for nothing and won't furnish clothes. We are just forced to make some complaint to ask for help and if the Civil law don't help us we are bound to die for the need of help through written and signed by Sam Dromomd and Jake Hicks, and Harry Henry and Joe Herring and Joe Rountree and Wil Smith and Joe Carson and Jerry Weekly

Several years ago, I went to the National Archives in Washington, D.C., to conduct research on the subject of peonage. I was looking at the Civil Rights index cards and I came across this card about a complaint a group of veterans was making to the Justice Department.

The complaint was filed on February 29, 1960. Victims unknowns, VA Hospital, Gulfport, Miss. Post card rec'd.dtd.2-21-60 signed by Group of veterans from said Hospital, alleging: They have been working us like slaves & don't want to let us go home, some of us have been here for many years. Some boys have died from beatings rec'd. in here. Req. investigation & set us free. Doctors, attendants & nurses act worst then criminals 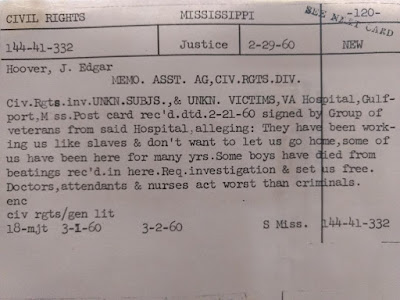 As we approach Veterans Day, I would like to remember the men who filed this complaint. I wish they would have written their names on this card.
at November 12, 2017 No comments: 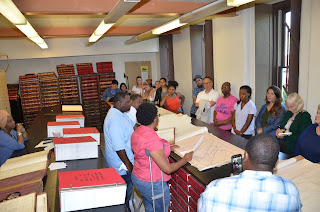